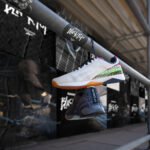 Whether dance, fashion, art or music is your preferred form of self-expression, there’s no wrong way if you stay true to yourself. That’s the message behind the inspiring new Ballantine‘s commercial, which harnesses the power of our diverse local talent to show that in a world of impersonators, individuality is king.

Ballantine‘s – a Pernod Ricard brand – is the world’s second-largest Scotch whisky brand and, true to founder George Ballantine‘s iconoclastic roots in breaking the rules of whisky making as far back as 1827, is again championing living life according to your own rules with its inclusive new campaign.

The Stay True: There’s No Wrong Way global campaign is now hitting South African shores with a dynamic television advert that features Shimza as well as a constellation of friends of the brand who are stars in their own right, from a Vaal-based amputee dancer to an indigenous dance troupe from Ekurhuleni. These are real people with real stories and authentic ways of expressing their individuality.

The commercial is a celebration of Mzansi’s diverse melting pot, urging people to “do it for the culture … dress to flex, or to relax … dance like you’re on the guest list … [and] turn those expectations off”. It’s a potent call to action to be true to your vision and your instinct.

“Working on this campaign was such a wonderful experience that helped me reflect my own experience and view on ‘Staying true’ and ‘There’s no wrong way’.

“From the brief, I felt so connected to this film because I could relate on a deeper level: I’ve always had an imposter syndrome for not having had formal training as a film director. So, firstly, working on this project really instilled in me the confidence that I can do it my way, and however my process unfolds as a filmmaker and artist, there’s no wrong way.

Says Justice Mukheli from Romance films, who directed the commercial

“Then, also, this project came with the opportunity to tell stories that are a fresh take among our competitors by bringing stories with heart and meaning that speak to the people from a relatable point of view. I’m so grateful to have contributed to this film and to have brought meaning and heart to it,”.

To show that Ballantine‘s is a whisky for everyone, embracing people who think for themselves and free themselves from society’s expectations, the brand decided to scout for lesser-known local talent instead of actors to feature in the campaign – South Africans who shine in their own, unique ways.

Keval Ramraj, the Ballantine’s Scotch Whisky Senior Brand Manager in South Africa, says that the local campaign taps into the true South African “passion points”, which include dancing, going out and dressing to express themselves:

“We feel these passion points resonate not just with our consumer but with South Africans as a whole, and we’d like to be the vehicle driving the spirit of ‘There’s no wrong way’ through these relevant touch points.”

“Shimza, who is the “face” of the campaign alongside many rising stars, truly embodies the essence of this message, as he has pushed boundaries as a DJ, taking his one-man show to Portugal and France and also branching out as a restaurateur and businessman,.

“His ‘Stay true’ mentality has brought many great opportunities for him, which he always brings back to his hometown, Tembisa, which he’s very proud of. To quote Shimza: ‘If you want to be the first DJ to perform in space, then make it happen – because there’s no wrong way.'”

Head to Ballantines.com to watch the Stay True: There’s No Wrong Way ad – and you’ll see it’s abundantly clear that Msanzi’s got talent – in bucket loads!

Here is a taste of some of the gifted individuals starring in the advert who play by their own rules:

Ashley Raphala, popularly known as DJ Shimza, was born in Swaziland and grew up in Tembisa township in Ekurhuleni, east of Johannesburg. Ashley is regarded as one of the most talented music producers and DJs in South Africa. Since the outbreak of Covid-19, Shimza has hosted virtual lockdown parties – also giving a platform to other local DJs on Channel O. He is owner of two restaurants, a trucking company and a marketing agency. He is currently the face of the Stay True: There’s No Wrong Way Ballantine‘s campaign.

Like Shimza, Jarrel is a change-maker and social entrepreneur from Tembisa who embraces his passion for social innovation through dance. He is the cofounder of the Indigenous Dance Academy, which teaches entrepreneurial leadership through the medium of dance. Over the past 12 years, Jarrel has set the standard for inspiring township youngsters and prides himself on creating opportunities for the youth of Tembisa in particular. This has earned him the distinction of being regarded as a kasi hero among the youth.

Hardy Keeve graduated from Oakfields College and performed in the Cape Town production of West Side Story before returning to Johannesburg to work with choreographer Owen Lonzar, performing at corporate events and launches. He has danced in music videos for the likes of Kurt Darren and Juanita du Plessis, as well as in dance pieces at Dance Umbrella and the National Arts Festival. In 2020, he worked as a dancer for a cruise liner company and is proud to count the Ballantine‘s commercial among his recent work.

Musa Motha is a 25-year-old amputee from Sebokeng in the Vaal, in southern Gauteng, who is always breaking barriers and conquering obstacles. He had to stop playing football in primary school after being diagnosed with a life-threatening type of cancer called Osteosarcoma. After successful chemotherapy treatment, he fell in love with music and started DJing before moving into the dance industry, working with the likes of Somizi Mhlongo, Drake, Tanisha Scott, Gregory Maqoma and James Ngcobo. He has rekindled his love for playing soccer, and also does motivational speaking and video editing. Musa’s slogan is: “I don’t believe in the word ‘impossible’. Instead, I break the word into two: I’M POSSIBLE.”

Justice Mukheli is a South African artist and filmmaker who creates commercials and fine art films. Justice is known for creating what has been described as “intellectually and emotionally dense art and films” that centre on the authentic African experience. Among his intentions with his work is to dismantle the negative global narrative of Africa and Africans. He is proud to add Ballantine‘s whisky to his long list of commercial clients.

Join in the conversation on social media:

ASAH M RETURNS WITH POWERFUL SECOND SINGLE – SOPHUMELELA, A SONG INSPIRED BY THE PEOPLE IN HER HOMETOWN OF BARKLY EAST