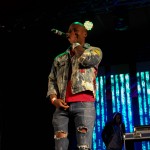 On Friday night, 19 January, one of South Africa’s top female rappers Nadia Nakai hosted the fourth and final Bacardi House Party Sessions. Held at Off Boyz residence in Sandton, it was the ultimate house party with a Nadia Nakai twist – giant lollypop and candy floss sticks were scattered around the garden, bright neon lights lit up polka dot and candy covered walls and the the pool area was filled with colourful balls.

Nadia Nakai debuted her brand new music video Naaa Mean ft. Casper Nyovest on the big screen before performing a string of favourites like Bragga and Savage just to name a few. In between her performance, Nadia interacted with guests and joined the crowd to get down to performances by rising artists DJ Baps, BlakSuga, BK, DJ Banques, Rowlene and Angie Santana.

This marks the last Bacardi House Party Sessions but rum fans can look forward to the Bacardi Holiday Club on 3-4 February 2018 where all 4 Bacardi House Party Sessions headliners DJ Speedsta, Frank Casino, DJ Shimza and Nadia Nakai will come together to perform along side international artist Swizz Beatz.
3 Stages, over 30 acts and only 1500 tickets available. This is the ultimate all-inclusive throw down you won’t want to miss.

For tickets and further details check out www.bacardiholidayclub.co.za

A comprehensive list of the 50 best museums in the world